The start of severe weather season always raises important questions about preparedness, especially for hazards like tornadoes.  This year, the topic is only more pressing and complex. As you navigate decisions about what to do to be safe, or what to recommend to others, we’d like to inform those choices with information on the effectiveness of various sheltering options.  This information comes from the most complete epidemiological work we have available – mostly information about historic F/EF5 tornadoes or large tornado outbreaks. Along with these studies, we add context to show what things look like for the far more common, weaker tornadoes.

Tornado outbreaks, especially with a potential for strong or violent tornadoes, can be frightening, but just how survivable are these events?  The answer may surprise you, and also calm you. Most people do not need to leave their homes to be safe in most every tornado that occurs.  In fact, only a portion of the population may need to take more advanced measures to ensure their safety when tornadoes threaten.  We hope this information can help you weigh your risks and provide for your personal safety during this difficult season.

Most people survive even the worst tornadoes

We begin with the strongest epidemiological works available – in particular, studies that not only count fatalities, but also survivors.  It’s perhaps unsurprising that these studies have only been done for very significant events, but those studies have produced consistent findings.  Namely, the expected fatality rate for those exposed to F/EF5 tornadoes is around one percent. Put another way, 99 percent of people exposed to the worst tornadoes survive the experience.  Importantly, this does not mean these events were not traumatic for the individuals and communities involved – they were.  Each was a tragedy. What we’re hoping to impart is this: when tornadoes get that severe and populations are in the way, tragedy may ensue, but the event is largely survivable with shelter available to many people.

Several studies reveal that overall fatality rates in the worst tornadoes, or tornado outbreaks, are actually quite low.  In the April 8, 1998, Oak Grove-Birmingham tornado that had 32 fatalities, University of Delaware and University of Oklahoma researchers David Legates and Matt Biddle estimated 1.1 percent of people in destroyed homes were killed. One GIS-based study, Cannon et al 2011, explored fatality rates for the April 27, 2011, tornadoes in Alabama, and found the overall fatality rate for all 62 tornadoes, including eight EF4 or EF5 tornadoes, was just 1/350.  The Emergency Manager for Joplin, Missouri, personally relayed the survival rate for his community was around 98.5 percent in the May 22, 2011, EF5 tornado.

Several studies were conducted on the famous May 3, 1999, tornado outbreak in central Oklahoma.  Kent State Professor Tom Schmidlin examined the fatality rate for those in the Bridge Creek – Moore F5 tornado, in particular, within the portion of the damage path rated F4 or F5 (only the worst-hit places).  He found one percent of those in such a circumstance were killed. In his analysis of the entire tornado path, Biddle also found a fatality rate by exposure of one percent.

Type of housing is the key

The Centers for Disease Control and Prevention, examining fatalities for all persons in an F5 tornado in Central Oklahoma that day, found one risk factor was especially significant in determining outcomes from this tornado: whether individuals were in mobile/manufactured homes or permanent homes. 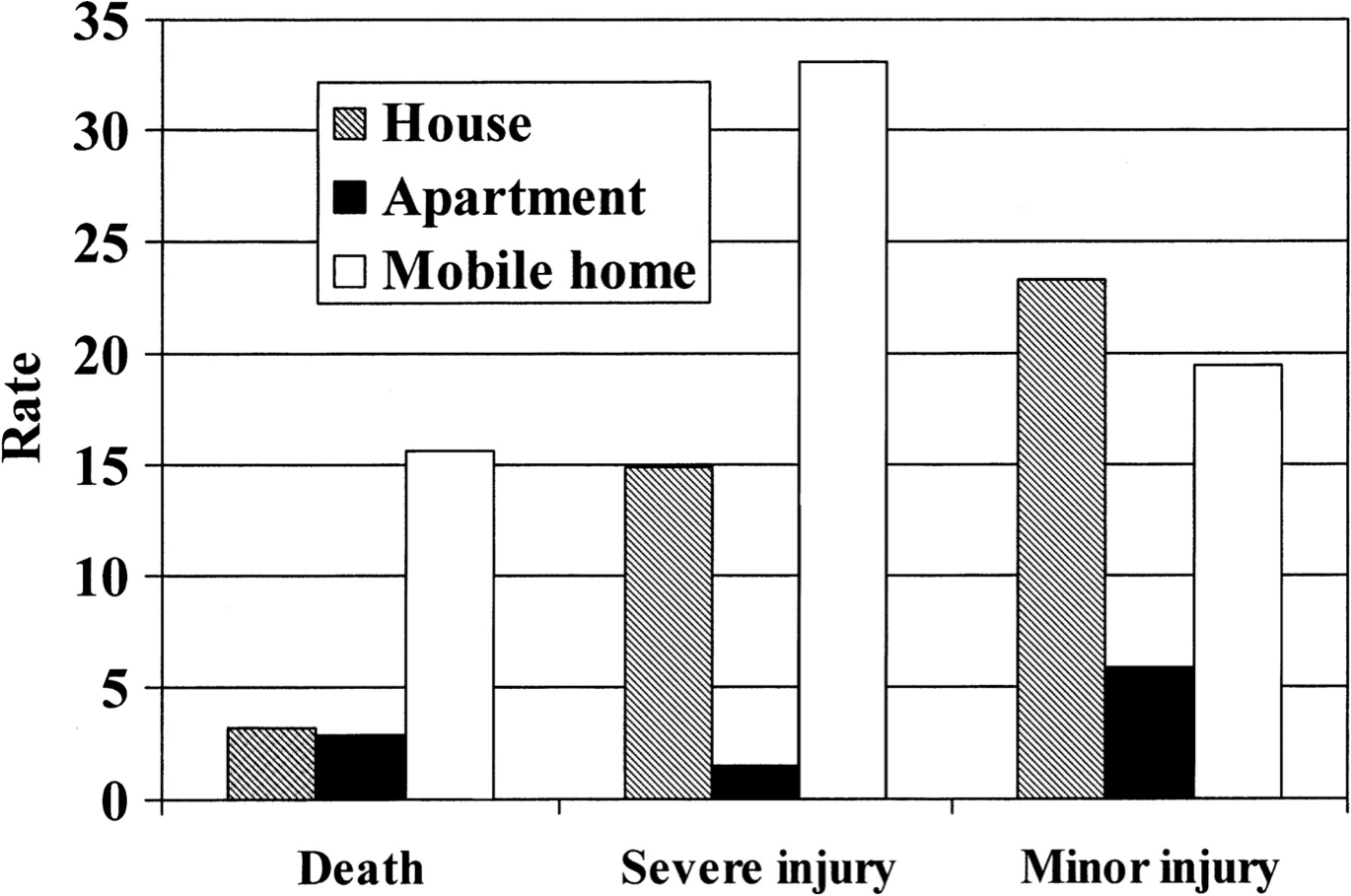 From CDC 2005: Rates of death and injury (per 1,000 specified homes damaged or destroyed) directly related to the May 3, 1999, tornadoes in Oklahoma.

This factor – the type of structure used as a refuge during the tornado – emerges just as significantly when you look at cumulative tornado fatalities across the U.S.

This figure by NOAA National Severe Storms Laboratory senior scientist Harold Brooks (produced specially for you/2020) shows the fatality rate for the U.S. population as a whole over time.  This is one way to understand tornado risk when you don’t have detailed studies of all tornadoes that occur. Notably, the fatality rate has generally been dropping since the 1920s, but only for a portion of the population.  The white dots on the graph represent individuals living in permanent homes. The black dots represent those in mobile/manufactured housing. As you can see, for those individuals, fatality rates are really similar to the 1920s – indeed, before we had severe weather warnings or advanced weather communication of any kind.

One of the big drivers behind those numbers is people living in mobile/manufactured homes perish more often in weaker tornadoes – tornadoes that rarely kill people living in other structures.  Of the killer tornadoes in the NOAA Storm Prediction Center’s official database (going back to 2008), individuals in mobile/manufactured homes were 79.7 times more likely to perish in weak (EF0/1) tornadoes than those living in permanent homes and 16.4 times more likely to perish in strong (EF2/3) tornadoes.  Importantly, most tornadoes that occur are weak, and most often, no one perishes in them at all.  In an average year, 2.5 weak tornadoes and 13 strong tornadoes kill someone, yet more than 1,000 weak tornadoes and 130 strong tornadoes occur each year!

Do I have to be underground?

The bottom line from the database is this: if you live in a permanent home and can get to an interior room and away from windows, your odds of survival are incredibly high if not perfect for most tornadoes that occur.  The oft-heard advice — you must be underground to survive a tornado — is simply not true at all.  The people who most need to consider leaving their structure are those who live in mobile/manufactured homes.  Anyone living in those homes can work to connect with nearby friends, relatives, and neighbors in their area who live in permanent structures to see if they would welcome a visit when tornadoes are possible.  This may be most important to do when strong tornadoes are possible. To reduce fatalities to the extent possible, public facilities used as shelters should prioritize access for these individuals.

As always, please be attentive when severe weather is possible.  Knowing severe weather could happen will help you and your family seek shelter quickly and effectively when it does occur.  And, happily, for many people, that simply involves a quick trip to your interior bathroom, closet, hallway, shelter or basement.